Research shows that an extract from hibiscus flower can seriously fight breast cancer, even when combined with chemotherapy treatments. 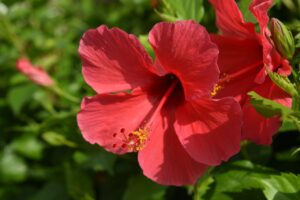 Hibiscus tea is made by boiling the flowers until the water turns red.

But now we can introduce research showing that a natural treatment may be able to be added to triple-negative breast cancer.

The researchers gave these cells the hibiscus extract alone, and then compared the results with chemotherapy agents taxol, cisplatin, and tamoxifen.

The researchers tested the cancer cells at 48 hours and 96 hours following application. They found the hibiscus extract alone significantly killed the two cancer cells, but did not harm the healthy cells. The killing of the cancer cells occurred on a dose-dependent basis. This is the gold standard for determining an anticancer drug.

In other words, the hibiscus extract beat the chemotherapy drugs:

“Hibiscus extract was able to selectively induce apoptosis in both triple-negative and estrogen-receptor positive breast cancer cells in a dosage-dependent manner.”

The researchers also tested the hibiscus extract against the cancer cell lines together with a combination of the chemotherapy drugs.

The study found that the hibiscus improved – enhanced – the ability of the chemotherapy drugs in fighting the cancer cells:

“Most importantly, addition of hibiscus extract was found to enhance the induction of apoptosis of chemotherapy treatments (taxol and cisplatin) in triple-negative breast cancer cells when compared to treatment alone.”

Other studies have confirmed findings

This is not the first study to show that hibiscus can treat cancer. A 2015 study from Taiwan’s National Defense Medical Center studied Hibiscus syriacus extracts on human triple-negative breast cancer cells.

The researchers found that not only did the hibiscus induce the killing of the breast cancer cells. It also inhibited the migration of the cancer cells, and their viability. The hibiscus was able to activate the p53 pathway and induce the p21 pathway, which causes the cell cycle to arrest.

This last study found several compounds in the hibiscus effective against cancer cells. These included triterpenoids betulin and betulinic acid. They also found other triterpenoid compounds that inhibited the growth of the cancer cells.

Hibiscus contains a number of other medicinal compounds. These include anthocyanins, proanthocyanidins, flavonols, and other polyphenols. They also include hibiscic acid, and tartaric acid, oxalic acid, malic acid, citric acid and stearic acid. Many of these are antioxidant and anticancer as well.

Case Adams has a Ph.D. in Natural Health Sciences, is a California Naturopath and is Board Certified as an Alternative Medicine Practitioner, with clinical experience and diplomas in Aromatherapy, Bach Flower Remedies, Blood Chemistry, Clinical Nutritional Counseling, Homeopathy and Colon Hydrotherapy. He has authored 27 books and numerous articles on print and online magazines. Contact: case@caseadams.com

THIS SITE CONTAINS NO THIRD-PARTY ADS

This website contains no third-party ads, no sponsored articles, no irritating pop-ups, and no automatically running videos. Our site is completely funded by purchases of our educational materials – books and webinars. We hope you will consider supporting this website and helping to preserve the knowledge of natural therapeutics for future generations.

This site is Copyright Protected